The Brisbane, Queensland Art Architecture and Feminism event was organised by Louise Mayhew and Susan Best from Griffith University of Technology, and was held at the Queensland College of Art, South Bank on Saturday 9 March, 2019.

In Melbourne, Victoria, Wikimedia Australia has partnered with the Women's Art Register again twice this year, the first on Saturday 9 March 2019 in a Art+Feminism Wikipedia Edit-a-thon. It was held in the Richmond and Burnley Historical Society rooms, in the basement of the Richmond Library, next to the Women's Art Register Archives, making it very convenient to access physical as well as online resources.

It was wonderful to hold this year's event in conjunction with other long-term partners, the #WikiD team at Parlour: women, equity, architecture who joined forces with us for the edit-a-thon.

Pru Mitchell and Alex Lum facilitated the day's training, and used the very useful Outreach Dashboard. The Australian Feminist Art Timeline was a much-used resource. Collectively we added just under 20,000 words about creative women to Wikipedia, with new articles on:

Architecture criticism was another theme of the day, with many additions to the Wikipedia list of architecture critics. As a result of the day the #WikiD team donated the book 'Women Architects in Australia 1900-1950' by Julie Willis & Bronwyn Hanna, RAIA, 2001 to the Women's Art Register archives.

We loved working with all these amazing women and are looking forward to joining forces again for the next Edit-a-thon.

On Saturday, 20th July 2019, following the success of our first event, a second edit-a-thon was run at the Richmond Library in partnership with the Women's Art Register for a Winter Wiki Edit-A-Thon, and again in close proximity to their archives making the creation of articles possible. We were again joined by the WikiD team in a very successful event.

Steve Crossin joined Pru Mitchell and Alex Lum to facilitate the training, and again using the dashboard, 74,000 words were added and six new files about women artists all contributed to Wikimedia sites. 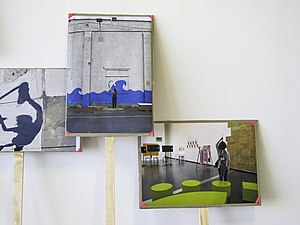 One of the images uploaded to Commons during the edit-a-thon in July, by visual artist Caroline Phillips

7 new articles were created in the event:

Wikimedia Australia looks forward to partnering with the Women's Art Register on future events to help encourage more women to contribute to Wikipedia, and improve the coverage of under-represented subjects on Wikimedia sites.

Retrieved from "https://wikimedia.org.au/w/index.php?title=Art_and_Feminism_2019&oldid=15239"
Discuss this page