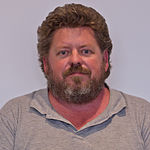 Tom Hogarth is from Perth and has over 100,000 contributions across multiple Wikimedia projects, including activities like categorising, tagging and generally sorting content. Tom will be bringing those skills along with his experience on multiple volunteer committees in Western Australia & Tasmania.

Robert Myers is from the Riverina region of New South Wales and has been contributing to English Wikipedia and Wikimedia Commons for over seven years. Most of his time is spent on taking and uploading photographs for Wikimedia Commons, which are uploaded under a free-use license. He is currently studying Bachelor of Creative Arts and Design in Photography at Charles Sturt University and an NSW RFS volunteer.