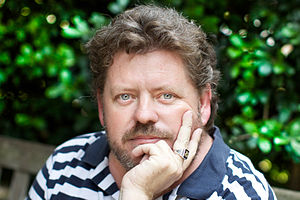 taken at Wikimania 2012, for use by The Foundation during this years fundraising.

User:Gnangarra I was part of the group that established WMAU, stood for VP at the first elections.

While not always a member I have continued to support WMAU/Wikiprojects work, some the activities I been associated with;

Wiki meetups I've organised 7 of the 8 Perth meetups, attended all of them

I'd like to thank the people who nominated me as well as the other people who offered to put forth nominations. As a wikimedian I've spent a considerable amount of time promoting WMAU and Wikipedia some of which is listed above. I've experienced first hand the processes of applying for funding, as well the frustrations that can come with dealing with that. I made it known to a number of people that I believed that there are problems and that being critical of those problems isnt always enough. I'm standing because I believe that the committee needs to improve the way it works, the way it makes decisions and especially the way its communicates.

The incoming committee will need to improve WMAU relationship with The Foundation, WMAU members should expect higher standards of WMAU when being assessed for funding. Additionally WMAU should not be beholden to The FDC for every thing it does, WMAU should be independent(requirement of incorporation) it should be able to decide the who, how, and when of projects. To that end WMAU needs to work on developing financial sources from other areas.

On 27th August I applied under Proposal:Camera equipment program for assistance, reciept of the application was recieved on the same day. Further information was requested and addressed in September. As of 14th November that application has not been mentioned in any of the published minutes of committee meetings. If elected I would still ask to committee to consider the application, though I'd remove myself from participating in any vote or discussion on the matter.

Update at the same time as posting this John has posted the minutes from the September meeting, which inculded mention of the request. checking emails I advised the committee I had done what was ask on the 1st October.

Retrieved from "https://wikimedia.org.au/w/index.php?title=Meeting:2012_AGM/Candidates/Gideon_Digby&oldid=7415"
Discuss this page