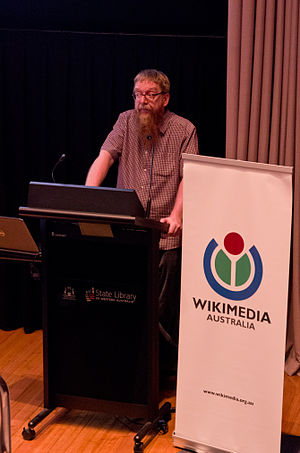 Andy presenting at SLWA on the WikiData tour 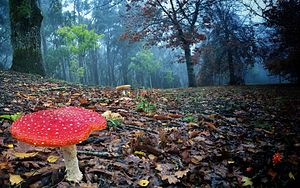 Winning entry for WLE-au by MHartwich taken in South Australia

1st workshop of Wikiclub NT at the Northern Territory Library -

I'd like to welcome everyone to todays WMAU AGM this is the 8th AGM held since WMAU was formed. My thanks to efforts of the 2016 committee during the past 12 months our most successful year paralleled only by the success of 2009 which kicked off the GLAM movement across the Wikimedia movement.

Some of your 2016 committee members have chosen to stand aside this year with them goes our thanks for the service they have provided over the years;

While we thank these people for their hard we also should acknowledge the efforts of the continuing members of the committe Pru, Robert, and Tom as well as welcoming the new member to the comittee.

Since unexpectaedly taking on the role of President last year its been an interesting journey WMAU has built strongly on the foundations prepared for us this year. Our largest event since 2009 was the WikiData where Andy Mabbett kindly donated three weeks of his time to tour Australia and Indonesia explaining how Wikidata works. Special thanks to Andy, Pru and Andrew for making this happen as well as a thank you to the various GLAMs that hosted the events in Melbourne, Sydney, Canberra and Perth. I also acknowledge the efforts of Siska and John from Wikimedia Indonesia for their efforts in organising the Jakarta stopover on Andy's way. We did a lot more than the Wikidata tour, in WA the Noongarpedia project continued to go from strength to strength with there now being over 1000 topics covered in the incubator. Two editors recieved support from WMAU to gain media accreditation for the RIO Paralympics. We have had two Wikimedians in residence at the State Library of Queensland. The WikiTown of Toodyay saw it second stage of QR codes place around the town and preparations are under way for the third stage. Our congratulations to Toodyay for being named 2016 State winner for Heritage and Culture of which the Toodyaypedia project played a small role.

Online there was one major active and that was Australia's participation in Wiki Loves Earth, it was by all measures a roaring success. Our initial goals were exceeded even what I thought of stretch goals our wildest dreams were surpassed. Looking forward to what next year produces. Yes we also looked at participating in WLM as well maybe 2017.

Wikipedia to moon drew a little bit of interest from one of our frequent partner organisations ALIAWest (western Australian branch of ALIA), unfortunately the final decision on the chosen content really took the wind out the sails of any project to grow contributors with the focus on currently featured content. Western Australian community members successfully applied for the creation of the WMAu first local branch. Local branches are a way of giving the local communities the resources to support smaller projects without the legal over heads of setting up either a WMF Usergroup or Chapter.

For the year ahead we are already looking to share the Noonagrpedia projects success with planning under way to share that journey with groups in Darwin and Brisbane initially. Our aim of that will help other communities address the distinct lack of Indigenous Australian knowledge across all project. Not every Indigenous language will be able to sustain its own language Wikipedia or Wiktionary, but we will never the achieve the "sum of all knowledge" with Indigenous knowledge participants. If your want to be part of this let me know.

WMAU has been asked to support a regional conference in Indonesia during 2017 so that will interesting opportunity, we remain committed to making an Australian conference a reality. WMAU also will endeavour securing a Wikimania in the near future as well and we will be building on the efforts of Andrew and Steve from the chapters conference in Berlin earlier this year to obtiain better metrics out of QRpedia.

I eagerly await the ideas and suggestions of the most important people of Wikimedia Australia it members.