I took a late flight from Brisbane to Perth on May 24 and returned on an early morning flight on May 28. The costs of these flights were $634.51. There was no accommodation cost as Graham Pearce and his family very generously offered to host me. All other costs were met out of my own pocket. 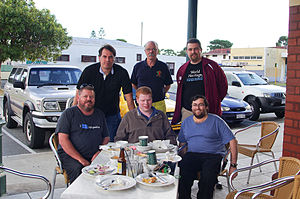 In the morning, Gnangarra and I met for breakfast with Henty, Roel, and Peter from the Fremantle Society, as well as Wikipedian Sam Wilson who has been heavily involved with the Freopedia project from the outset. We discussed the project in general terms, and looked at the first, "special edition" plaque which was to be unveiled at the event the following night. Following this event, Gnangarra gave me a tour of the Fremantle area.

In the afternoon, I attended the tenth Wikipedia meetup in Perth, for an informal discussion with Western Australian Wikimedians. After the meetup, Gnangarra introduced me to Lise Summers from the State Records Office over a couple of drinks in the CBD.

I spent Sunday morning working with Graham on the rule change submission to Consumer Affairs Victoria and other administrative matters.

In the afternoon, I returned to Fremantle for the official launch of Freopedia, which was held at the W. D. Moore building. Among the guests were Dr Brad Pettitt (Mayor of Fremantle), Simone McGurk (member for Fremantle), the board of the Fremantle Society, many Fremantle city councillors, representatives of the Perth GLAM sector, other members of the community, and perhaps most importantly many of the Wikimedia volunteers who built the Freopedia content. Henty Farrar, Brad Pettitt and I all gave speeches before the ceremonial unveiling of the first Freopedia plaque (pictured).

Following the official launch, Gnangarra and I decamped to a local tavern with many other Wikimedians for further discussion of where the Freopedia project could go next.

Later that evening, I was interviewed by phone on Steve Gordon's 6PR radio programme The Way We Were, which is primarily a local history programme. Again, the main topic of conversation was Freopedia and how the content was developed. 6PR is one of Perth's most popular radio stations, and given how prepared and knowledgeable Steve Gordon was about Freopedia and our movement, I'm not surprised. Obviously, even though I was on during Sunday night, having this sort of exposure for Wikimedia Australia was extremely valuable.

Monday morning was occupied with a visit to the State Records Office of Western Australia (SRO), arranged by Gnangarra and Lise Summers from SRO (who has been a great friend to the Perth Wikimedia community and the movement generally). The meeting was attended by a number of management staff along with Cathrin Cassarchis, the State Archivist. The topic was establishment of a Wikimedian in Residence at the SRO (perhaps in conjunction with the World War One proposal), but budgetary constraints on the SRO side may make this difficult. While SRO were receptive I do not feel that they are ready to formally engage with us yet.

In the afternoon, SatuSuro drove me to the town of Toodyay, which is about an hour's drive east of Perth. The Toodyay Shire Council and the Toodyay Historical Society were among the recipients of the 2013 Western Australian Heritage Awards, where they learnt about Freopedia. They then approached the Western Australian community with the idea of embarking on similar projects with Wikimedia in Toodyay (not necessarily limited to QR codes). My first meeting was at the shire offices with Shire President Kevin Hogg, Shire CEO Stan Scott, and other council staff. We gave a brief overview of the Freopedia project and other events that have taken place on the east coast, and answered questions about how the movement is funded and content on Commons, Wikisource, and Wikivoyage. While they did not have any specific ideas for projects, they indicated that they would be willing to offer support to any projects proposed by the Wikimedia community. Following this event, we met with the Toodyay Historical Society and other members of the local community at the Freemasons Hotel. Again, they were enthusiastic about the idea of holding a Wikimedia event in their town, with a photo gathering expedition or a Wikipedia editing workshop seeming to be the most popular choices.

Retrieved from "https://wikimedia.org.au/w/index.php?title=User:Lankiveil/Western_Australia_trip_24–28_May&oldid=14763"
Discuss this page