As many Wikipedians will tell you, it's the discovery of some key piece of missing content that first spurs them into action. For Anna Kerr, it was her search for information on legendary independent feminist publisher Spinifex Press.

“I was looking for information about them ahead of attending their 25th anniversary celebrations,” she says, "and there was no Wikipedia entry! I thought that was weird and it just occurred to me we should do something about it.”

This moment led her to found one of Australia’s longest-running Wikipedia editing groups.

Kerr, who is the Principal Solicitor of the Feminist Legal Clinic in Sydney, joined forces with technologist and general polymath Spider Redgold to apply for a grant to found a women’s Wikipedia editing group. Supported by Create NSW through the NSW Writers Centre (now Writing NSW) in 2017, the Women Write Wiki (WWW) group was born. The group’s title is a feminist appropriation of the acronym for ‘World Wide Web’.

The group meets twice each month at The Women’s Library in the inner-Sydney suburb of Newtown, to write about Australian women authors represented in the library. Created in 1992, the library’s collection was kickstarted by community donations left in large tea chests placed around Sydney, and the results eventually found a home at Newtown Library. Perhaps unsurprisingly, Spinifex Press and its founders Renate Klein and Susan Hawthorne were among the first pages the WWW group worked on. 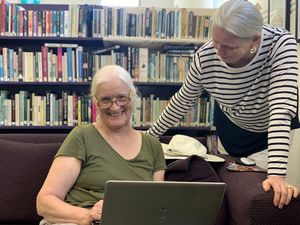 At this time, just 16 per cent of articles on English Wikipedia were about women. By March 2021, the group was celebrating four years of editing, activism and friendship, during which they estimate they’ve now created over 300 new pages on Australian and New Zealand women. Their efforts form part of growing international movements, such as Women in Red and Art+Feminism, whose work to increase the visibility and representation of women on Wikimedia platforms has seen the number of pages about women grow to nearly 19 per cent as of March 2021.

“Wikipedia just mirrors the battles we have in general society,” Kerr says.

This gender bias is perpetuated by the dominance of men on Wikipedia, which are estimated to make up as much as 90 per cent of editors, yet another reason WWW was formed. The group has produced some of Australia’s most prolific Wikipedians such as Ann Reynolds and Margaret Donald who walked through the doors of the library and have been stalwarts of the group and Australian editing community ever since.

“I attended some training, got hooked and eventually I got better at it,” Reynolds says. “I’ve now written 247 Wikipedia pages. And that’s just the women, then there’s women’s prizes and organisations.”

Kerr and Reynolds both attribute the group's success to the collective nature of their editing efforts. As many women editors describe, this kind of support is essential in making the often difficult case for the notability of women on Wikipedia. Historically and today, women are represented less in primary and news sources offering a limited information and citations.

“That's why having a team is so important," Kerr says. "If you post something or have an issue, you can send it around and then several people would jump in and support you. It’s just so much better working together. As an individual woman you could become quite demoralised.”

“Yes!" Reynolds agrees. "We turn up, have a chat and there’s moral support."

Retrieved from "https://wikimedia.org.au/w/index.php?title=Four_years_of_Women_Write_Wiki&oldid=17058"
Discuss this page