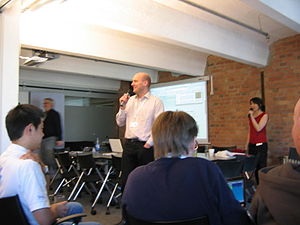 The first day was almost entirely lectures of some form in the main conference room at Zanox Campus. It had become clear by the middle of the day that this volcano was more than a simple inconvenience - four chapters had incomplete delegations and 5 of the 10 WMF staff were stuck at airports around Europe. Wikimedia DE director Pavel Richter's "travel situation updates" became a regular feature of the event (see picture). Feeling that we should bring something Australian to the meeting, Sarah had brought souvenir pens and I had brought soft toy koalas and kangaroos - they now occupy homes and offices all over Europe and North America and appear to have been well received.

By the second day, the chapter delegates had all arrived, so we concluded the "state of the chapters" briefings before splitting up into Working Groups. There were several available, so Sarah chose External Communications and I chose Educational Institutions, which I served as note-taker and speaker. We both attended the "Outreach Case Studies" stream in the afternoon.

The third day was fairly light on content but I attended a useful group session on professionalisation in the morning. A wrap-up (and a final travel update!) later, we had a group photo taken, participated in the birth of "Wikimedia Asia", and headed back. Unfortunately, I was struck down with a bad flu the day after the end of proceedings - as it seems were a number of scattered delegates, no doubt due to the questionable ventilation in the main room.

Sarah took a lot of notes - read hers for overview/detail, these are additional.

State of the Chapters I

(More impression than detail - refer Lodewijk's notes at [1] which give a good summary of the session, and Sue's slides.)

Presented by Arne and Jan-Bart, the idea was to communicate to us how the plans for formally recording roles within Wikimedia's organisation were coming along. However, at times, there seemed to be a distinct lack of clarity and agreement as to key terminology used such as what the "movement" was and who qualified as a "volunteer". As a result, the session was less useful than it could have been, although information about the timeline was conveyed to us.

Different chapters have different needs. Ours is fairly unique because geographical realities mean we have five (or more) separate communities rather than one community, so each centre needs its own activities. Many chapters have a deficiency in volunteer numbers, or have a central group who are very active and risk burnout while the rest do not participate much. Others have no problem finding volunteers to do specific practical tasks (eg. staffing events), but have real trouble finding leaders or coordinators. There is also the difference in commitment level by volunteering online vs volunteering in real life (the latter is more likely to feel committed).

Ideas raised to deal with these issues included:

Erik Moeller gave a very useful presentation on how WMF allocates grants. The most interesting thing from our point of view is that they have a large amount of money to allocate, and are happy to fund reasonable projects within Wikimedia's mission which are set out on the required form and which undertake to complete reports on how the money is used. A failure in one project by a chapter is not taken into account when considering whether to award other grants. Non-financial requests, such as participation or involvement by WMF head office, will be considered provided sufficient notice is given.

meta Grants:Index will be used as a central information point. Successful grants last year, among other things, covered a project for the Czech chapter to buy a camera and take photos of municipalities; for the NYC chapter to run an internship program (more on this later) and Indonesia's "Free Your Knowledge" project.

Grants for 2010-11 close on 15 May but applications will be considered out of remaining funds after that point on a case-by-case basis.

Sarah went to External Communication while I went to Education, a group I ended up note-taking and speaking for. My full notes will be published elsewhere. A lot of the discussion related to Wikipedia and Wikimedia generally, and I understand the Usability people are interested. The secondary stuff is probably of most practical application to WMAU.

Both Sarah and I attended this session which included two presentations by Jose Spierts of Wikimedia Nederland and one by Tomasz Ganicz of Wikimedia Poland.

(Bieb = Dutch slang for library) In the Netherlands, the library sector has similar ideas to Wikimedia with regard to sharing of knowledge and are looking to digitise content, particularly that with relation to cultural heritage and oral history and the like. A collaboration offers the benefit to Wikimedia that it isn't simply a passive transfer of content but can also incorporate the expertise and knowledge of library staff who can supply context and metadata. This presentation reflected WMNL's efforts in establishing a collaboration with the Dutch Association of Public Libraries. The main advantage of the approach appeared to be that WMNL (a chapter almost exactly the same situation as ours with regards to size and actively participating members) only had to support and provide feedback to the library staff; all the funding and staffing came from the libraries. Some discussion focussed on how to handle information which was not suited to Wikimedia projects.

The second presentation reflected WMNL's efforts in the education sphere. They targeted 14-18 year old students, using teachers as multipliers. There was no focus here on editing Wikipedia but more on the correct use of Wikipedia (reflecting some of the conclusions of the Educational Institutions working group above). In this model, the teachers do the teaching, but Wikimedia provided the teachers with the information necessary. Considerations regarding how to proceed were influenced by the high number of schools which are IP blocked, as well as the low quality of the editing which often results from "let's edit the wiki" projects. As a result of the discussion following this section (and in part due to a question from myself), the section on the Outreach wiki for education was created.

The Polish Wikimedia chapter organised an event over 10 days using 4 cars designed to take photographs across a remote, poorly-covered region of Poland which would benefit Wikimedia projects, particularly Wikipedia and Commons. Including accommodation and such (at hostels and B&Bs in the local areas), total cost came to about A$2,500, although significantly more had been budgeted. They worked with local tourist agencies and small businesses who provided significant help and advice to them based on local knowledge, and it even got in the local media. It seems that there were quite a few lessons learned (re errors in electronic maps and not planning too precisely before one goes), although the result was extremely productive - 200 articles enhanced and 2000 articles improved. More importantly, it fuelled a sense of camaraderie and community engagement amongst those involved.

I attended a party on board the Eastern Comfort boat on the Saturday evening, which was a fantastic opportunity to network with some people I'd seen around but not yet gotten the chance to chat with, including Bence Damokos of the Hungarian chapter, Goran Obradovic from Serbia, and Martin Lück, a young WMDE volunteer who has pioneered a newbie mentoring program with reasonably demonstrated success which Frank Schulenberg is looking to use in particularly the middle-sized language projects.

We split into two groups, with Australia, Czech, Denmark, Italy, Norway, NYC and Poland being represented in the volunteer professionalisation stream. Most chapters have the same problem - a core of (mostly board) volunteers who shouldered the great majority of the work, and a wider community of supporters who waited for said core group to do the work.

We had a shared session afterwards where we traded the overall results of our group work. The other group had found three models of professionalisation in effect - the German model of executive professionalisation, the French model of hiring project people, and the Polish model where the staff were purely supportive or administrative. Considerations included:

Report to the World

This was fairly general in nature and hard to summarise, but "good vibes all around" would probably pick up the general sentiment. In brief summary, several participants suggested this meeting had been more collaborative and productive than the last one as some issues had been resolved in the interim. People were clearly thinking in terms of inter-chapter collaboration in areas such as professionalisation, projects, education, work on developing nations and the like. The exchange between small, younger chapters and the mature chapters was also appreciated.

We then had a final meal together and then a photo shoot, the aim being to have people positioned roughly in terms of what part of the world we were from (placing Australia at the far right end with the Asian delegates), before saying our goodbyes.

Four separate conversations/interactions which predated the meeting combined on the second day into a proposal for a "Wikimedia Asia" brand, which was somewhat formalised during lunch on the final day. Essentially the motivating factors for this are as follows:

Among the key principles established at the meeting were:

Retrieved from "https://wikimedia.org.au/w/index.php?title=2010_chapters_meeting/Andrews_notes&oldid=3139"
Discuss this page