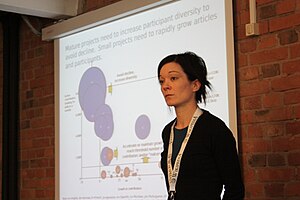 State of the Chapters.

Report on the developers' meeting 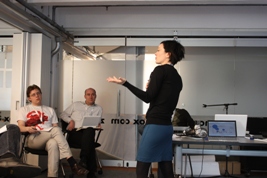 Purpose of the strategy project

Global penetration according to ComScore statistics

Penetration rates are calculated as the percentage of available internet users using Wikipedia, according to Comscore's statistics.

The goal is to achieve long term growth

To achieve this, the foundation has set three main board approved goals:

Things the foundation believes the chapters can focus on 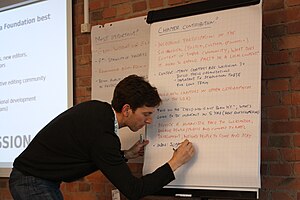 What the chapters can contribute

How the foundation can best help the chapters

What's the most important part of the strategy? What are your priorities and what can you contribute? How can the foundation help you?

What are your chapters priorities/what can you contribute?

With a grant presentation by Erik

Linking to the library

The wiki-expedition is a photo-collecting project. The idea was first developed by Australian Wikimedians (who may/may not have actually gone ahead with it!).

A group of people in various vehicles travel around taking photos for the Wikimedia projects in order to fill specific gaps in content. 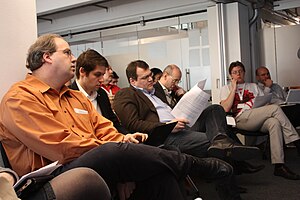 On Sunday, I attended the Institutional Partnership session and Andrew went to the Professionalisation session.

Benefits of partnerships between Wikimedia and cultural institutions

(From Erik)Be aware that Institutions may have a very narrow focus and budget, so don’t over-estimate the alignment or fit with Wikimedia’s mission. Important to figure out mission fit very early on.

Wikimedia Foundation's role is to support the chapters and provide the infrastructure. The foundation wont become an advocacy body but wants the chapters to become vocal voices in local and global copyright reform.

Report of the Wikimedia Foundation's board of trustees meeting

Andrew and I were invited to attend a short meeting with other chapters in our region after the formal meetings were over. There were about a dozen people there, including Ting Chen.