On Saturday 8 March 2014, seven Wikimedians travelled by bus from Perth to the town of Toodyay for the day.

The day had two specific aims;

The day was organised by Gnangarra (Wikimedia Australia) along with Margie Eberle, the Museum Curator/Heritage Officer from the Shire of Toodyay. It was an eventful start when at 6:30, I arrived to pick up the bus only to find that I couldn't access the yard. After waking a few people to no avail, the owner of the bus and myself ended up climbing the fence and removing the gate. This put us behind the scheduled timetable. I contacted Orderinchaos to combine two of the pickup points. Arriving at the location, we found that thanks to Perth's ever reliable public transport service (maybe their bus was locked in as well), OIC had missed the earlier train by 2 minutes and was still waiting for the next train to arrive. Adding another pickup point at the Stirling railway station, we eventually arrived in the eastern suburb of Midland to pick up the last of the Wikimedians attending before heading out to Toodyay. Following Toodyay Road its entire 64km (40mi) length, discussions invariably turned to Wikipedia activity. Fortunately, before the need to seek ARBCOM intervention, we arrived in Toodyay. Dropping two planned photo stops along the way, we arrived 15 minutes behind schedule to a delicious morning tea of cakes and sausage rolls from the Toodyay Bakery provided by Shire of Toodyay at the Tourist Centre & Connor Mill.

After coffee, editors were given a tour of the three storeys of Connor's Mill, where the Shire is currently installing QR codes. Wikimedians representatives of the Shire and the Historical Society jumped on the bus for a tour around town. We headed first for the lookout in Pelham Reserve, where visitors can get an overview of the town's layout. This interesting spot was the site of a signal station during WWII, has a memorial to pioneer James Drummond and it also has a number of walking trails which include signage identifying plants - guess where another set of QR codes will be installed? We then headed to the Newcastle Gaol Museum - if you havent read the article about Toodyay, I suggest you have a look at this article written during the afternoon activities, it's a fascinating story. After a very interesting tour by one of the museum's volunteer guides, we gathered at the exhibition about the early exploration of WA. Did you know that for many of the early explorations that Toodyay was the last town they encountered? This exhibition and many of the other exhibits in the museum have also been QR coded to WP articles. 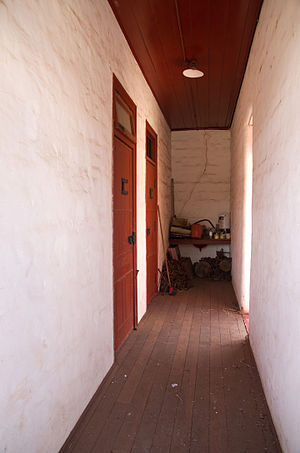 Inside the Toodyay Lockup

From there we ventured across the road to the Newcastle Police Stables - such an interesting story to these, they were originally built as part of the Newcastle Gaol complex. When the gaol was replaced by the Toodyay lockup (built behind the stable along with a new police station in 1907), the stables continued to be used by the WA Police Force, while the old gaol was leased out for a residential home. Behind the stables is the Toodyay Lockup built in 1907. It gives an insight into how prisoners were treated in WA. This building isn't open to public access, but thanks to the Shire, we were able to look inside both sections. Just like the Tardis(to quote Margie), it's bigger inside than you would expect. Even more impressive given its size is that there are two separate sections to the building - one for the men, the other for ladies.

Returning to the bus, we took a drive around the streets of Toodyay. With it, we validated the reasoning for saying the old & new St John the Baptist Churches are across the road. We then travel along Stirling Terrace (the town's main street) across the Avon River, past the showgrounds and out to the cemetery, yet another place where in time there will be QR codes. From there we returned back to Stirling Terrace to take a moment or two for some lunch. Given all the many and varied choices in Toodyay for a meal, we headed to the w:Urwin's Store and the Toodyay Bakery. We sat out on the balcony taking in the views of the main street.

Lunch over, we headed to the Toodyay Library for an afternoon of online activity. We are fortunate to have members from the Toodyay Historical Society all of whom have published books about Toodyay. Andrew and Sam spent the afternoon working individually with two people, helping them to create content and write articles. Significantly, there are only about 10 or maybe 12 active editors in WA so these two new editors mean a 16-20% increase in editors in WA. Mitch Ames and author Beth Frayne - who happens to also be a finalist in the WA heritage awards for her work - spent the afternoon addressing article naming, ensuring that each article would be at a stable name ready for QR code linking. Article names are one of the most critical issues around the creation of WikiTowns. It's from here that the world links into Wikipedia, so getting them right beforehand saves money as well as confusion about locations, including them being installed at the place. Other editors utilised the resources available to write about additional topics, while I took the opportunity to discuss the many technical aspects of the next stage (printing, production, and installation) with Margie.

hard at work in the Library

After a couple of group photos were taken by the Library staff (one was posted to their Facebook page) we headed back to Perth. Perth's next meetup will take place in Toodyay on 4 May 2014 during the Moondyne Festival. While we haven't yet decided on the location, I can see that the balcony at the Toodyay Bakery will be hard to beat. 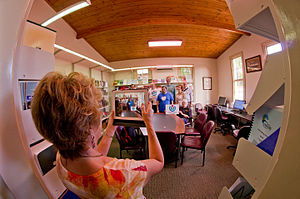 taking one of those mandatory group shots

Articles created on the day or as a direct result of it;

A number of people, myself included, had cameras ranging from point-and-shoots to professional equipment, and we were taking photographs during the day. They can be viewed on commons at;