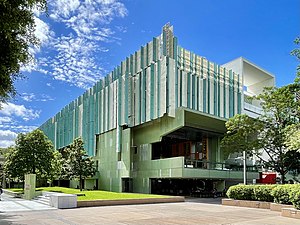 Exterior of the State Library of Queensland, 2021 (Wikimedia Commons)

The news of the first SLQ Wikimedia partnership made national news, and a large banner reading "Thank you, State Library of Queensland" was featured on the top of Wikipedia.

The donation consisted of 50,000 out of copyright images, which was one of the largest donations to Wikimedia Commons at the time, and the images have now been used over 5,000 times on articles across English Wikipedia. You can browse the images on Wikimedia Commons here.

Since then, we have found many ways to add content to Wikipedia, and run programs encouraging Queensland Public Libraries to do the same, with a common aim to get Queensland communities to share their places, people and stories with the world through the Wikimedia projects.

The First World War Wikipedian in Residence program was established in 2016 by the State Library of Queensland to tell the story of World War I in Queensland underpinned by the rich collections of the library and their affiliated GLAM organisations.

The program had three resident Wikipedians across 2016, who hosted events, created new pages and categories, assisted members of the public, and trained SLQ staff on editing.

Read more about this project on Wikipedia GLAM and you can also read the project case study here.

State Library of Queensland have taken part in #1Lib1Ref since 2017 when they added an impressive 1,000 new citations to Wikipedia. That year they also started QWiki Club, a monthly Wikipedia editing club established to build on the success of the #1lib1ref campaign. They have also made contributions to Wikisource.

A list of all SLQ Wikimedia events can be found here.

Retrieved from "https://wikimedia.org.au/w/index.php?title=State_Library_of_Queensland&oldid=19615"
Discuss this page