Explore Wikimedia platforms and projects that could extend your collections and engagement
16 March 2022.

There are so many opportunities for galleries. libraries, archives, museums and record management (GLAMR) to grow their impact through Wikipedia and other Wikimedia platforms.

Over the last six months, Wikimedia Australia collaborated with New Zealand Wikimedian Mike Dickison to develop a special four-part training program for GLAMR organisations in our region to explore opportunities for how Wikimedia platforms and projects can extend their collections and engagement.

Training developer Mike Dickison says the modules feature explore the philosophy of the movement as well as practical exercises to start participants on their editing journeys.

This training was designed to be facilitated by Wikimedia Australia team of facilitators or can be presented in a self-guided manner by any organisation using the downloadable resources. Slides and notes are provided for each module designed to be presented over approximately one hour. 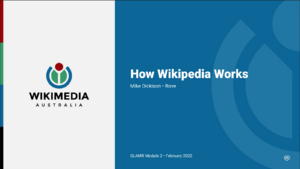 Module 1 - An introduction to the Wikimedia Movement

Wikipedia is a ubiquitous part of the Internet, but where did it come from, and why do we rely on it so heavily? Run by the non-profit Wikimedia Foundation, Wikipedia is maintained not by an editorial board but by hundreds of thousands of self-organising volunteers. Along with its sister projects Commons and Wikidata it now underpins the world’s knowledge ecosystem, but has significant biases and gaps – and, famously, anyone can edit it.

Since so many of us rely on Wikipedia, it’s important to know how it works. We’ll lift the hood and look at how edits are made, how vandalism is detected and removed, and how Wikipedia tries to stay neutral and reliable while avoiding “edit wars”. You’ll learn how to assess the trustworthiness of an article by who’s edited it, and how to make changes yourself. Anyone who clicks the edit button and improves the encyclopaedia is a Wikipedian, and at the end you will be too.

Anyone can edit Wikipedia, but should they? Attempts to use it for marketing or spin can end in disaster; but used well, Wikipedia is a powerful tool for disseminating information. Learn how your organisation can reach an enormous audience by being part of the Wikimedia community: the different strategies range from simply using an open licence for your images to working with a Wikipedian in Residence.

Wikidata is a free and open knowledge base that can be read and edited by both humans and machines. Launched in 2012, Wikidata acts as central storage for the structured data of its Wikimedia sister projects including Wikipedia, Wikivoyage, Wiktionary, Wikisource, and others. Learn what Wikidata is, explore key concepts and vocabulary, how it relates to other Wikimedia projects and see what makes it so powerful.

Retrieved from "https://wikimedia.org.au/w/index.php?title=Wikimedia_Australia_launches_a_new_GLAMR_training_program&oldid=18675"
Discuss this page