What was the Community Conference?

The inaugural Community Conference was organised by Wikimedia Australia and successfully held on Saturday 15 June 2019.

The goals of the community conference were:

The conference was an all-day event held on Saturday 15 June in Sydney, with a committee workshop the following day.

Community members were encouraged to suggest areas of interest and volunteer to present. Five lightning talks were presented, and three workshops.

The Conference was live streamed and can be viewed on the Wikimedia Australia channel.

Wikimedia Australia acknowledges the generous support of the City of Canning for Ingrid's attendance at the Community Conference.

Following Ingrid's presentations in Sydney, there was a request for her to present on the Noongarpedia project and on the challenges faced with the inclusion of Australian Indigenous knowledge at Wikimania. Her yarn is scheduled to be held in the Menchú room at Wikimania from 14:00 on Sunday 18th August.

The University of Sydney, Old Teachers College building (opposite the 1993 Education Building), Room 329.

The University of Sydney kindly provided us with a space, and the necessary facilities to host the event. 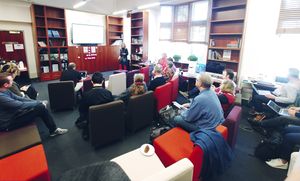 Community members were encouraged to suggest areas of interest and volunteer to present. At registration nine attendees expressed interest in presenting a lightning talk at the conference. Five lightning talks were presented, and three workshops.

This was an extremely worthwhile and positive event. Many connections were made across the movement in Australia. Two new committee members were recruited.

Feedback: We have not yet surveyed participants formally about the conference.

Retrospective: We should have had thank you cards and messages of thanks drafted to acknowledge those who presented at the conference, the sponsors of the venue and the keynote speaker, and the key organisers.

Retrieved from "https://wikimedia.org.au/w/index.php?title=2019_Wikimedia_Australia_Community_Conference&oldid=15705"
Discuss this page