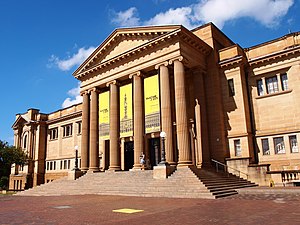 Wikimedia Australia has partnered with State Library of New South Wales (SLNSW), and supported them with several projects, including hosting a Wikipedian in Residence in 2013.

As part of the residency, library staff were taught how to create content on Wikipedia and given guidance across Wikimedia projects.

The library has a vast collection of images which have been added to Wikimedia Commons, and in 2021 they reported there were over 48 million views of State Library images in Wikimedia Commons.

In 2014, they presented the paper Marking up NSW: Wikipedia, newspapers and the State Library which noted SLNSW content on Wikipedia and Wikimedia Commons had led to increased traffic to their website.

In 2016 the library staff joined our 1Lib1Ref activity to add references to Wikipedia articles, and have continued to take part since.

2018 saw us partner again to present a half-day seminar for the Wikimedia community, library staff, GLAM professionals, researchers and educators.

Retrieved from "https://wikimedia.org.au/w/index.php?title=State_Library_of_NSW&oldid=19818"
Discuss this page