The 2022 conference in Sydney bringing together Wikimedians from East, Southeast Asia, and the Pacific.
16 December 2022, James Gaunt.

In November 2022, Wikimedians from across the East, Southeast Asia, and Pacific region arrived in Sydney, Australia to meet and share their projects and ideas.

Held between 18 to 20 November 2022, this was the second regional conference for these Wikimedia communities. It was preceded by the Worlds of Wikimedia Conference held 17 to 18 November, also in Sydney.

ESEAP was opened by Wikimedia Australia's President Amanda Lawrence on Friday 18 November, and representatives from several regions sang songs from their home country. 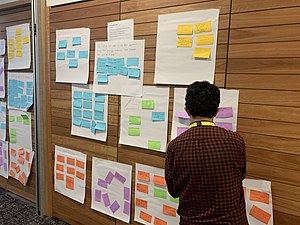 The ESEAP 2022 program was split across two rooms. One was recorded and streamed online featuring presentations, while the other featured a mixture of workshops and open discussions around developing an ESEAP Hub.

Saturday opened with a Conversation Cafe where everyone wrote down and discussed the challenges of running Wikimedia events in their region. They shared how they'd learned to overcome challenges, and what further changes they'd like to see across the Wikimedia Movement.

Many of the presentations across the conference further touched on themes of overcoming challenges, such as preserving endangered languages and cultures or building new communities.

During the workshop on Wikisource, Papuan Fairy Tales by Annie Ker was shown as an example of a public domain work that had been scanned and could be transcribed. Volunteers began to transcribe and proofread the text and by the end of ESEAP 2022 the entire book was completed.

A World of Languages 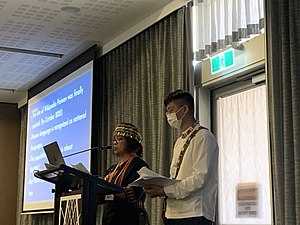 During a presentation from a member of Wikimedia Community User Group Hong Kong, language loss was discussed, and members of the audience agreed future conferences should have more presentations in native languages.

Other projects around language included:

These discussions led to the revelation that Wikimedians have their own language. Phrases like "edit-a-thon", "Wikidata", "source editor", and "sister project" can all sound alien to newcomers who are unfamiliar with the jargon. Even concepts like "open access" or "free knowledge" can be confusing.

Photos from across the ESEAP weekend have been added to Wikimedia Commons. You can add your photos to the category ESEAP Conference 2022.

Video recordings of most presentations are also available on the Wikimedia Australia YouTube channel and have been added to an ESEAP 2022 playlist.

Across the weekend, the hashtag #ESEAP was used and more discussion and photos were shared on Twitter.

Thank you to everyone who attended ESEAP 2022 in Sydney, and helped make it such a success. We hope the presentations provoked exciting ideas and the discussions started will all be continued through the new year.

Retrieved from "https://wikimedia.org.au/w/index.php?title=ESEAP_2022&oldid=19843"
Discuss this page