WOW was previously held in-person during June 2019, and for 2022 the conference featured in-person, online, and pre-recorded presentations from people around the globe. Many presenters had arrived from Asia and were also presenting at the Wikimedia ESEAP conference that weekend.

Photos and conversations were shared using #WOW2022, and retweeted by the WorldsofWiki Twitter account. Photos were added to Wikimedia Commons.

Following a welcome to country by Indigenous Elder Brendan Kerin, Bunty Avieson gave an introduction to WOW 2022 and an overview of the next two days.

The opening keynote was given by Tim Sherratt, who joined us remotely from Canberra to discuss his work online and across the GLAM sector. His slides are available to view here.

Tim highlighted the resources of Trove, where volunteers have corrected over 400 million lines of text in digitised newspapers and documents. He spoke about his GLAM Workbench, and noted the use of persistent links and access to metadata has gone backwards for many online resources.

Waray is a major regional language of the Philippines and this presentation by Joseph Ballesteros and Belinda Ballesteros showed how Lsjbot had been used to increase the number of articles on Waray Wikipedia. Waray Wikipedia is accessed by people from around the world who want to read Wikipedia in their language.

Challenges and Rescue Balinese Manuscripts (Lontar) on the Balinese Wikisource by Creating Metadata, Cataloging, and Digitizing.

From Bali, I Gede Gita Purnama Arsa Putra and Dewa Ayu Carma Citrawati showed how they've been adding Lontar palm-leaf manuscripts to Balanese Wikisource. Their project WikiPustaka has used Wikidata and Wikisource to collect metadata and assist with proofreading and transcription. The Lontar are kept in private collections, and are often deteriorating, making their preservation difficult but even more urgent.

Lisa Maule and Sophia Coghini presented on their work with the project Pasifika Arts Aotearoa, which aims to increase the number of Wikipedia articles about Pacific Island artists in Aotearoa while also providing Wikipedia editing knowledge within communities.

Sophia shared her personal story of becoming a Wikipedia editor, and the difficulties finding appropriate reference material on Pasifika Arts. Both Sophia and Lisa would like to add more images to Wikipedia, and find ways to include oral histories as references.

Keynote: Vandals, scandals, and Wiki-archaeology: I (can't) see for miles

Graham Pearce spoke with Gerard Goggin about fighting vandalism on Wikipedia. Graham, who is blind, uses a screen reader to correct spelling mistakes and errors on Wikipedia. He discussed his interest in "wiki-archaeology" and fixing the problems he finds across Wikipedia. 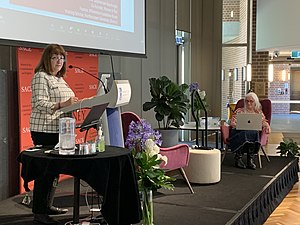 In honour of Wikipedian, feminist, and English scholar Adrianne Wadewitz, this panel featured presentations from four women who are behind campaigns battling gender inequity on Wikipedia.

Rosie Stephenson-Goodknight, founder of Women In Red, and member of Wikimedia Foundation Board of Trustees. In 2015 Women In Red proposed to write biographies about women on Wikipedia every day, and now have 33 languages participating. They invite everyone to join them.

Annie Reynolds, winner of the 2021 EDNA award for "making a feminist difference" with her editing group Women Write Wiki. Annie has coordinated the group since 2017, and she highlighted their inspirations and work, as well as her own contributions to Women In Red.

Caddie Brain, journalist and former staff member of Wikimedia Australia, spoke about she became involved with Wikipedia through her Wikiclub NT group, and worked with the National Gallery of Australia on their Know My Name gender equity campaign which created 100 new Wikipedia pages.

Netha Hussain presented findings from a pilot study looking at the gender gap on Wikipedia in India, co-authored with Anwesha Chakraborty. While the percentage of biographies about women is 19% on English Wikipedia, it's between 18 and 32% on various Indian language Wikipedias. Women in India are also less likely to participate in editing due to unequal access to smartphones and the internet, but this is changing.

Prolific Wikipedia editor Jess Wade has recently made news for creating over 1,700 new Wikipedia articles about women scientists. In her presentation she discussed her work, how she wants everyone to appreciate science like she does, and how seeing more women scientists on Wikipedia helps build representation and confidence in the next generation.

Jess Wade's presentation is available to watch on the WOW website here.

Introduced by Terry Flew, Heather Ford launched her book Writing the Revolution: Wikipedia and the Survival of Facts in the Digital Age which focuses on how the Wikipedia page on the 2011 Egyptian Revolution evolved following its creation mere hours after the revolution began. The book was ten years in the making and is now available via MIT Press. 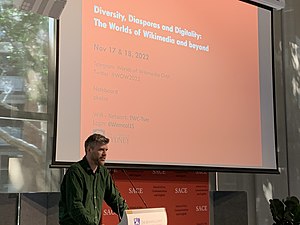 Keynote: Wikipedia - the last great place on the Internet

Richard Cooke opened day two with a talk about Wikipedia, and how it's used by people (and machines) every day. His next book, a cultural history of Wikipedia, will be published next year.

Wikimedia and the multisector evidence ecosystem

Amanda Lawrence and Brigid Van Wanrooy discussed their research into sources used on Wikipedia. Amanda showed the role of different media sources and which ones were considered best per Best Ref. Brigid showcased her work with the Analysis & Policy Observatory (APO) such as The Missing Link project and how open access research helps everyone, and Wikipedia.

Rachel Cunneen presented recent research around digital media literacy among school children, finding almost all Australian children were using the internet by age four but weren't taught media literacy until their teenage years. She made the points that better fact checking and information literacy are needed in schools, and educators should reevaluate their negative perceptions of Wikipedia’s reliability.

Co-presenter Mathieu O'Neil wasn't able to attend, but Rachel covered their work together, including research into developing a new approach to media literacy, using Wikipedia as a fact-checking tool, and the recent book Six fact-checking lessons for kids. 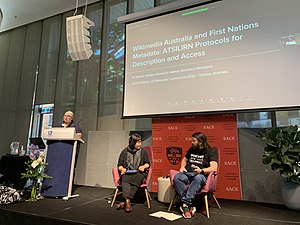 They showed how the ATSILIRN protocols were an early step in assisting GLAM organisations who hold First Nation stories, and highlighted AustLang as a useful resource providing information about Aboriginal and Torres Strait Islander languages assembled from referenced sources.

Philip Egbule and Juliet Ossai were scheduled to present Feminists’ Movements and Campaign for Gender Parity and Conflict Mediation in the Global South: Using Social Media for Long-haul Activism. This remote session was unfortunately cancelled, but you can read their abstract here.

Retrieved from "https://wikimedia.org.au/w/index.php?title=Worlds_of_Wikimedia_2022&oldid=19846"
Discuss this page