Wikidata is a database of information which can be used to support Wikipedia, Wikimedia Commons, and other Wiki projects. When you search for something online, or use a virtual assistant like Siri or Alexa, data is pulled from Wikidata to give you the best results.

But Wikidata also has a list of identifiers linking to other databases that include Nick Cave, like libraries, music streaming platforms, and websites with information on his film, writing, and music careers.

One of these is Jaxsta, an Australian company who host the world's largest database of official music credits sourced directly from record labels from around the world.

Some of their data had already been added to Wikidata, as can be seen on Nick Cave's Wikidata entry where there is a link to his Jaxsta profile:

But at the start of this year there were still thousands of musicians in Jaxsta's database who weren't linked with their Wikidata entry. Obviously having a complete set identifiers helps anyone researching musicians, and in particular being able to easily find songwriting credits is useful for people writing in-depth about music.

After reaching out to Jaxsta they were able to export some data for us which included their top 100,000 artists with the artist name, Jaxsta profile ID, Known Aliases, Spotify ID, Apple Music ID, Facebook ID, and their top releases.

This data was then used to match up similar data already in Wikidata using Mix'n'match, a tool I previously wrote about here. This process of collecting and uploading data was facilitated by Toby Hudson who also runs introduction to Wikidata sessions with us.

Mix'n'match allows us to match data from Jaxsta to Wikidata by finding similar names, or by matching ID's held in both databases like the Spotify ID or Facebook ID, and then inserting the Jaxsta profile ID into the correct Wikidata page.

Depending on how well the data matches, a lot can be done automatically. But for matches where Mix'n'match isn't sure, it adds it to a list of preliminarily matches which need to be manually confirmed or removed.

For example, Mix'n'match saw 2Shotz on Wikidata and 2Shotz on Jaxsta and added them to the list of preliminarily matches. By confirming the match, 2Shotz now has his Jaxsta profile included on their Wikidata entry.

Of those potential matches, Mix'n'match found over 50,000 which were preliminarily matched, and were ready to be checked. 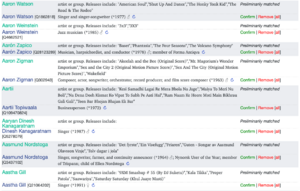 Preliminary matches might be wrong so need to be manually checked

While those preliminarily matches sound promising, each one needs to be manually checked before confirming they are linked correctly as unfortunately some will be incorrect.

Usually I will check if the artist is on Wikipedia or another database such as Discogs, and cross check information there such as song names with what is already on Wikidata and Jaxsta.

Mix'n'match also finds duplicates in Jaxsta's database, as sometimes a musician might release music on different record labels and their profiles need to be merged. If you find duplicates you can request they're merged using this form.

Currently, less than 10% of the artists from Jaxsta's data has been fully matched to Wikidata. Partly this is because a lot of those artists aren't on Wikdiata yet as Jaxsta have a larger database of musicians than Wikidata.

As Wikidata improves with more musicians added, it will be easier to match Jaxsta's data, as well as the many other music related projects in Mix'n'match.

For now, everyone can contribute to Mix'n'match by logging in with your Wikipedia account, and you can help match the Jaxsta profile ID project here.

Retrieved from "https://wikimedia.org.au/w/index.php?title=Adding_Jaxsta_-_the_Australian_database_of_international_songwriting_credits_-_to_Wikidata&oldid=19686"
Discuss this page